If you had told me a year ago that I would be attending the 2018 Ohio Valley Regional Emmy Awards, I would have, in my best Elaine Benes voice said to you, "Get out!", and shoved you hard on the chest. It would have been incomprehensible that I would be anywhere but sitting at home on a Saturday night, or perhaps at my wildest, having dinner with friends at one of our usual haunts. But there I was, sitting with my best friend, dressed in a beautiful black evening gown, and surrounded by the top media talent in a four state region (KY, OH, IN, WV). You could have knocked me over with a feather. But let's back up. This didn't happen overnight and the prep work getting us ready for this night was a week in the making. Give me a few moments of your time and I'll tell you how the unthinkable became a reality.

Let's start off by telling you why we were there. A year ago we became friends with Cameron Mills, a former University of Kentucky men's basketball player who was on TWO national championship teams. He had us on his radio show a couple of times and a friendship began. It's been fantastic getting to know him and he is one of our very favorite people on the planet. He is kind, a true supporter, and benevolent to everyone he meets. He, along with Dick Gabriel of WKYT and Jason Epperson, made a documentary called "Out of the Blue", chronicling the '98 Kentucky basketball team and their unlikely rise to the NCAA National Championship. And guess who he turned to when it came time to create the graphic for the DVD? Leigh, being a graphic artist by day, used her talents and came up with just the right thing, and then to beat the band, the documentary got nominated for an Emmy! I was able to use my talents in event planning to help put together the perfect premier party at Winchell's here in Lexington where over 50 people showed up for a special viewing. We were glad to help Cameron because he has been so good to us over this past year, introducing us to so many people and giving advice and encouragement when needed. It wasn't long after he found out that it had been nominated for an Emmy that he called us and invited us to attend the awards ceremony. We were thrilled to accept!

So after the invite came, we had the same thoughts as every woman, "What on earth will I wear?", followed closely by, "I need to get in shape." The frenzy began and thanks to some very generous people, we found ourselves a week before the ceremony with lots of goodies in store for us. The most important thing, at least in a gal's mind, is the dress. A black tie event calls for a full-length gown, and our friends at Macy's invited us to come and pick out whatever we wanted. Squeal! I chose a black, one shoulder, column dress with an almost dragon scale appearance by Nightway, and Leigh looked stunning in a cobalt blue (or Kentucky blue as we like to say) hi-low ballgown by Adrianna Papell.

The Monday before the event, we were invited by our friends at Skin Secrets to enjoy a HydraFacial so that our skin would be glowing and radiant. Sarah Zabawa, our favorite esthetician, did the three-step process on us in the beautiful and serene setting of the Skin Secrets treatment room, and I immediately noticed an improvement in the appearance of fine lines and my undereye area. This is the perfect treatment, especially in the winter, as our skin dries out. With their very affordable SkinCircle memberships, this is going to be something I do for myself on a regular basis. After all, your skin is the first thing people notice about you. Why not take care of it? Who says you have to grow old gracefully? Not me! 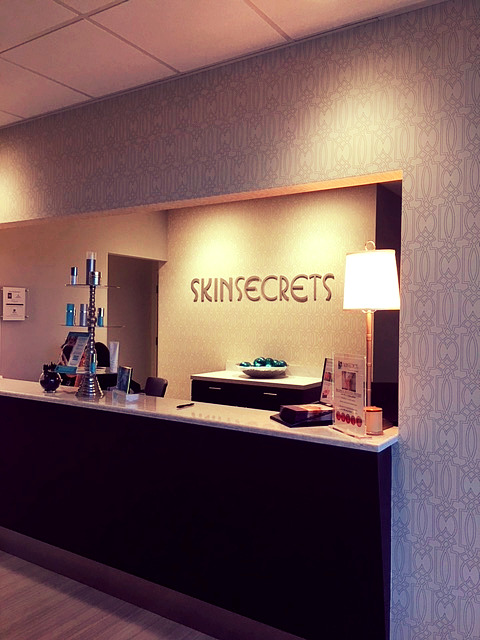 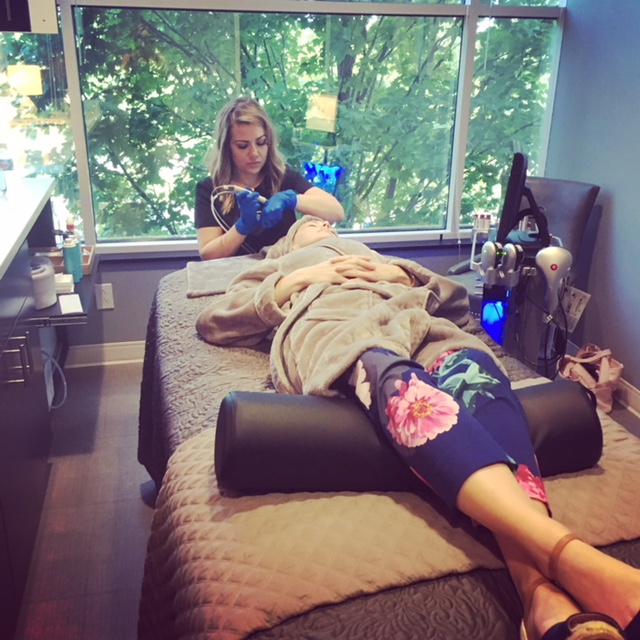 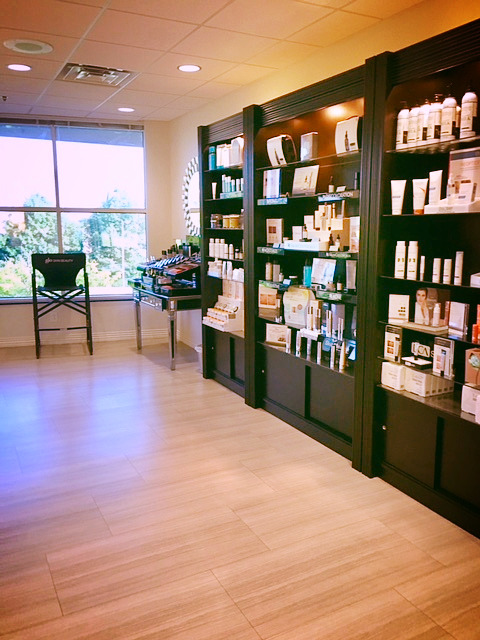 Wanting to lose a couple of inches and feel more confident zipping up our dresses, we went in search of something we had heard of but never tried...a body wrap. Now, I envisioned being wrapped in cellophane and made to exercise, sweating away the inches, but this was the exact opposite. Sonja with Wrap Me Lex, who has been in business for over six years, told us this would be a relaxing treatment in which an herbal body contouring cream would be applied and it would leave our skin feeling silky soft, tightened and toned. It also acts as a body detoxifier, and we all know how much we need to detoxify. After first exfoliating our skin, the cream was applied and Sonja began wrapping us with cellophane. Now, this is definitely not something you want to do with someone if you are shy as you have nothing on but a disposable bra and panties. Needless to say, we saw a LOT of one another that day, and it is a humbling experience, but, as Sonya says, it is a judgment-free zone and the goal is to embrace your body, look at it with an open mind and not hating it, but just telling it, "Hey, you can't spread out this far." Ha ha! After we were wrapped, we laid on comfy tables, she tucked us in like our mommas used to do, and we went nighty night for an hour. I mean, come on, I know people who would pay big bucks just to be able to take a nap during the middle of the day! At least this way, you're doing something good for your body, as well as your mind. We awoke from our slumber, the cellophane was cut off, and we stood in front of the mirror looking slimmer and feeling fantastic! Wrap Me Lex is moving to the Lexington Athletic Club in the coming month, so be sure to check out all of the other great services she provides. You won't be disappointed in making yourself a priority for a change and investing in your health. After all, if you don't have your health, what do you have? 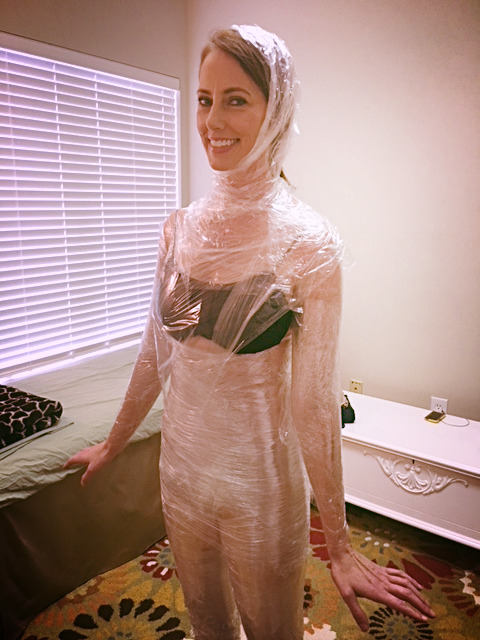 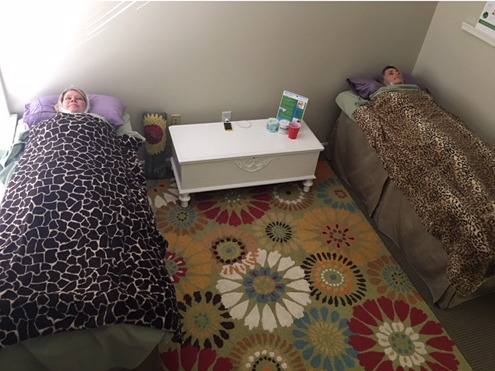 So we had our dresses, our skin was glowing, and all that remained was hair, makeup and nails. Now, Leigh is more adept at doing her own hair and makeup than I am, so I turned to GlamLex for my makeup and Indigo Salon for my hair. Remember Sarah, our esthetician? Well, she has a side hustle (everyone needs a side hustle) called GlamLex where she and her friend, Bri, do hair and makeup for weddings and other special events. (They have made us pretty before, and if you want to read about our experience, check out our blog, "From Pumpkin to Cinderella". ) Sarah did a great job on my makeup and it lasted ALL DAY, the only touchup being my lip gloss. How's that for awesome? For my hair, I wanted an updo that wasn't too severe, a bit tousled, and Heather came up with the perfect twist. She really is an artist, with hair being her medium. I loved it! A quick mani at Lovely Nails using a color by Opi called "Color So Hot It Berns", and I was FINALLY ready for our big night!

We arrived at the convention center in Lawrenceburg, Indiana, in style as Cameron had rented a limo SUV for nine of us, and filing out onto the sidewalk in front, we felt like a million bucks. There were throngs of beautiful people all dressed in their finest. (Is there anything better than a sea of men in tuxedos? I don't think so!) The women were resplendent, and I was so happy to see that no one else had on my dress (every woman's nightmare). We got in the line to have our picture taken in front of the Emmy backdrop and were soon ushered into the blue-lit ballroom. The dinner was delicious and the ceremony was quickly underway. One by one, winners were announced, the excitement building as it neared Cameron's category, Sports-News & Features. Sadly, when the name was called, it wasn't "Out of the Blue", and we were momentarily sad and did the forced clapping that losers make after such a disappointment. However, it is true what they say, as cliched as it might be: "It is an honor just to be nominated". There is a sea of impressive talent out there! We didn't let that dampen our mood too long, though, and were soon cutting up and laughing as before. One of our tablemates, Kirk Hasselmann, did win an Emmy for his work, and that afforded us the opportunity to hold one in our hands, if only for a brief moment. Thanks, Kirk! 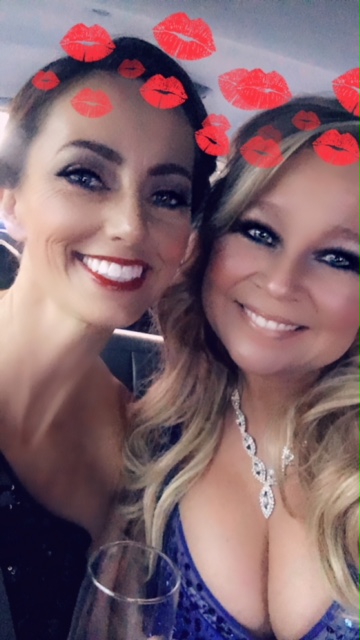 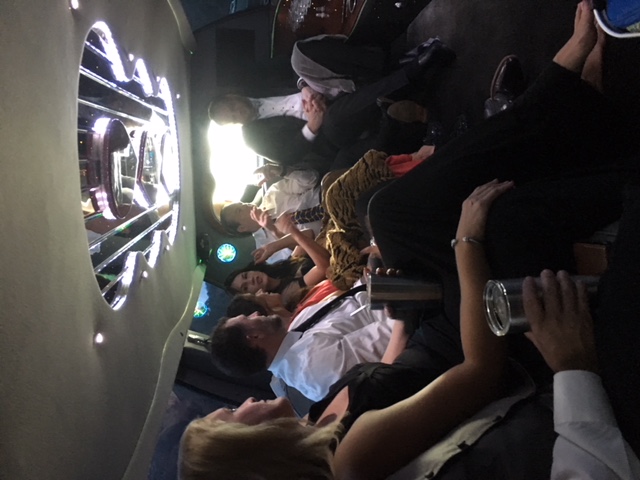 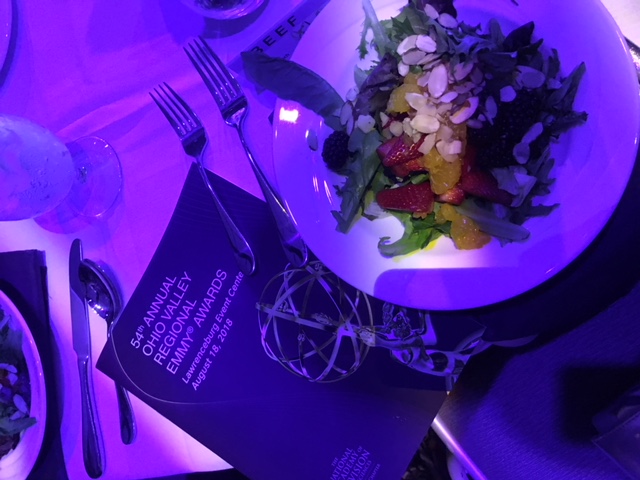 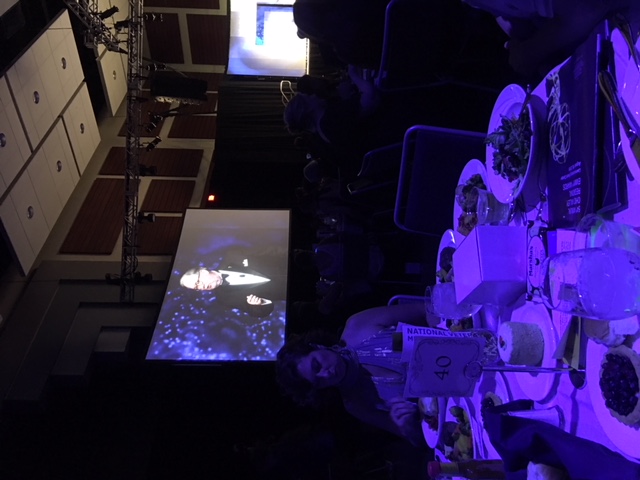 At the conclusion, we all piled back in the limo and grumbled about the loss, but agreeing on one thing: "Out of the Blue" is a fantastic piece of documentary work and in our books, Emmy worthy. To see for yourself, order a copy by clicking here. It would make the perfect Christmas gift for any True Blue fan!

And what night of late night partying wouldn't be complete without a stop at White Castle for a Crave Case? We may have looked a little odd going into White Castle after 11:00 dressed in evening wear, but dang, we were hungry! The cheeseburgers hit the spot and soon everyone drifted in and out of sleep as the miles rolled past and we returned back to Lexington. It was a long week, but we loved every minute of it and so happy that we had this awesome opportunity. It just goes to show you, you never know what is just around the bend.

Girlfriend Getaway at The Barnsley Resort